How might you facilitate the collaborative design of thousands of active learning lesson plans across hundreds of courses?

As a new university with a unique and innovative curriculum, Minerva required a new method for collaboratively authoring a growing multitude of syllabi and lesson plans.

Course designers at Minerva began creating syllabi and lesson plans for the inaugural year of teaching by using Google Docs. While this worked for a brief amount of time, it quickly became apparent that it would not be a sustainable beyond a handful of courses.

Issues that were difficult to overcome included data that was unstructured, file management that was becoming unwieldy, and a cumbersome review process that left critical feedback unnoticed. All of this was compounded by the fact that the number of syllabi and lesson plans that would need to be created for sophomore through senior years was going to grow exponentially.

How could we develop a tool to make this process structured and streamlined?

The users of this tool would be course designers developing curriculum, and college deans reviewing and directing the development process, as well as faculty who were providing feedback on lesson plans they were meant to teach.

I worked as the Product Designer on this product and collaborated closely with our Chief Learning Scientist, course development leads, and college deans to develop the product.

The timeline for the project was fairly tight, as the tool needed to be in place before the course development needs rapidly expanded. This left us with just a handful of months to design and implement a replacement tool.

In conversations with curriculum designers, it became clear that a successful product would be focused around three requirements:

With this framework in mind, I began a set of structured user interviews with key stakeholders to better understand the needs within these requirements and how they could best be presented to the end user.

I started by evaluating different ways of organizing the information for the syllabus view. Borrowing from the filter/result column approach of the grading tools, we quickly moved toward a solution that incorporated a master index page which allows you to quickly view courses from certain semesters or colleges.

The initial version of this view quickly became overwhelming for reviewers or deans with access to dozens or hundreds of courses. With this in mind, I designed, tested, and helped implement a solution that employed a collapse/expand affordance. This was sufficient to ensure that the data presented wasn’t overwhelming. 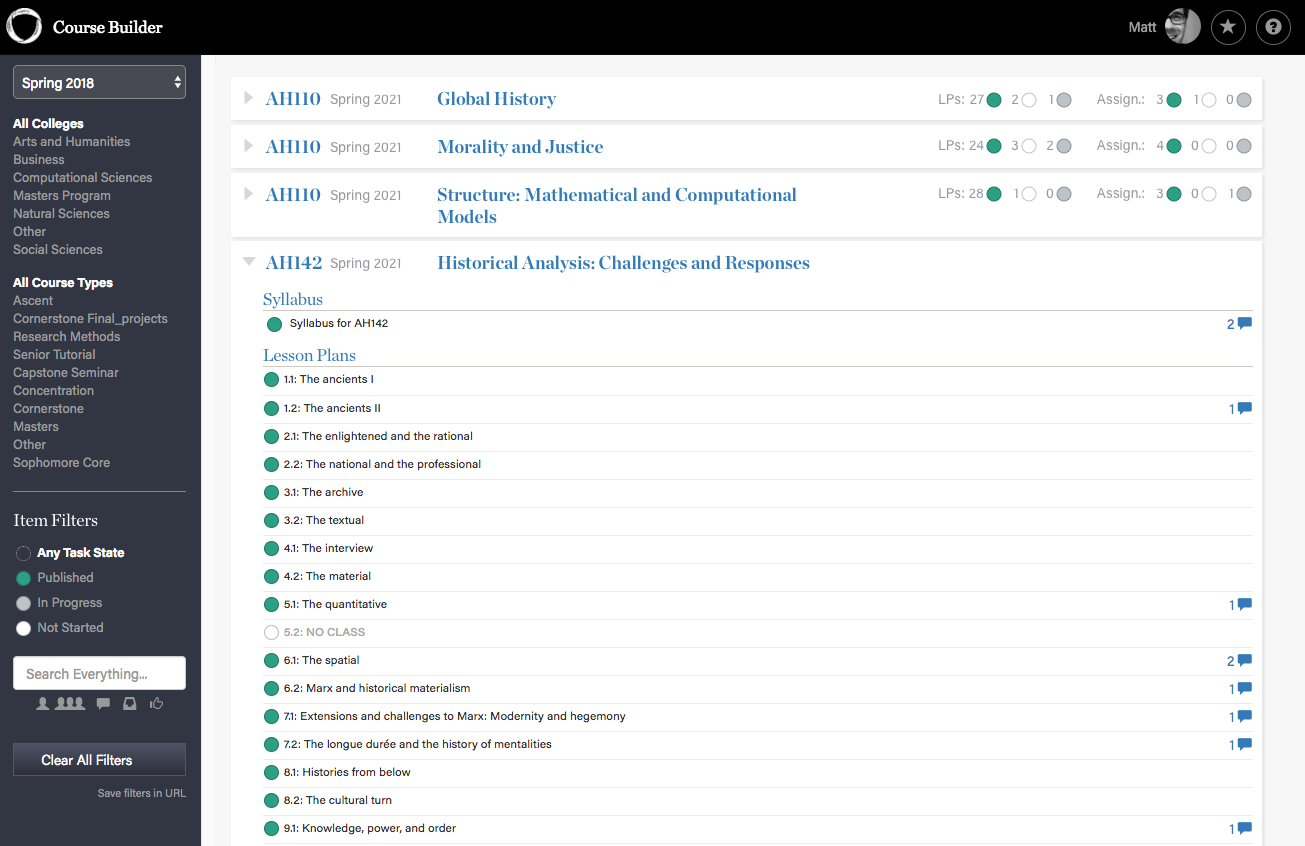 The home view of Course Builder allows users to see that status of every lesson plan currently in development, as well as how many open conversations are occurring within each.

As the feedback process was critical, we also designed a way to see how many open discussions were still ongoing within any given syllabus, solving for one of the deficiencies of Google Docs.

At the syllabus level, affordances were added to make editing readings, outcomes, or assignments as seamless as possible. Faculty feedback led us to incorporate a way to easily track the use of outcomes that were used within the class, and student concerns about escalating class costs led to a feature that tracks the fees that can quickly add up from readings behind paywalls. 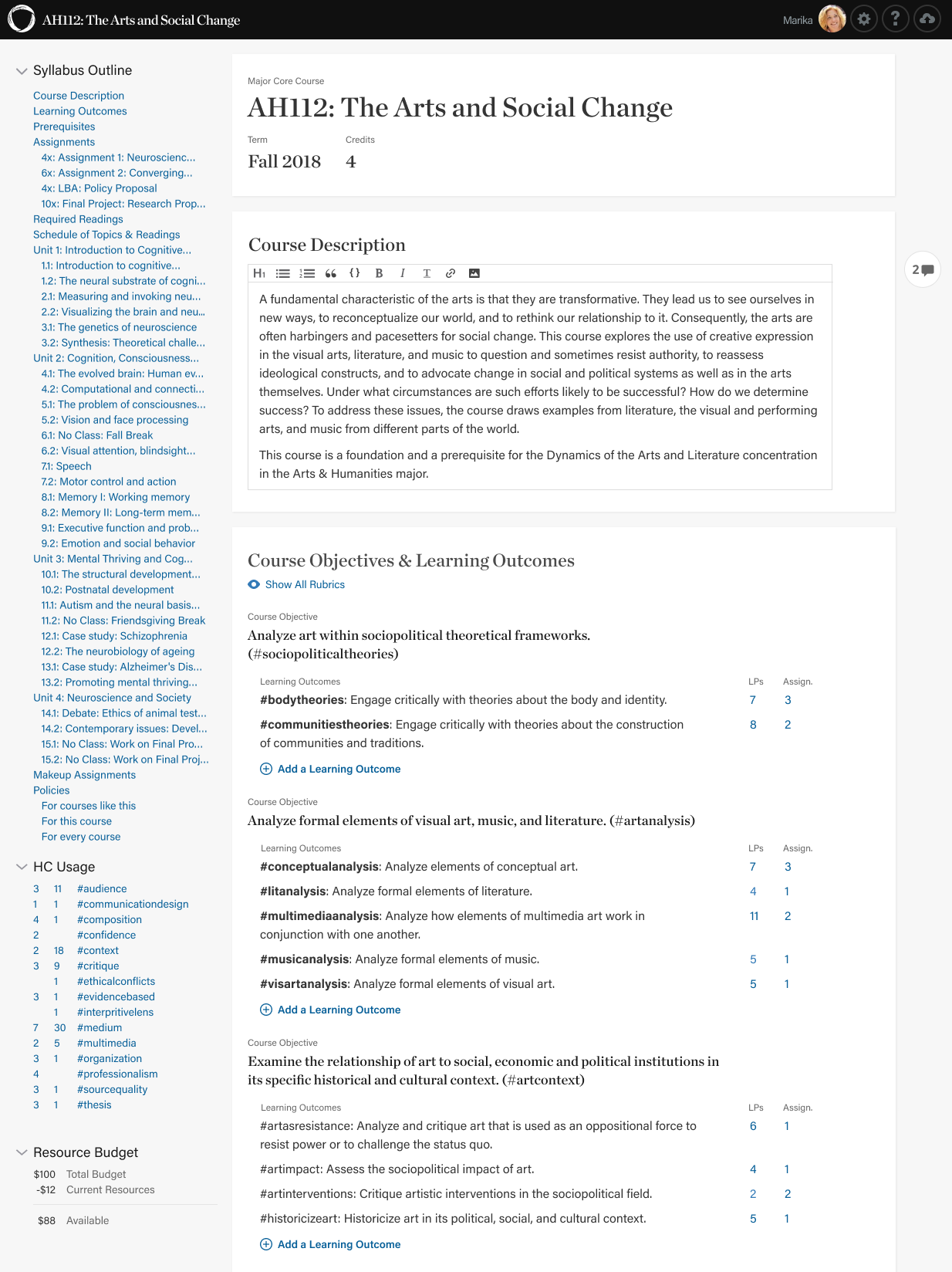 The feedback feature was also designed and developed at this time, facilitating discussions between team members that could be closed out when complete.

A contextual commenting feature allowed course developers, faculty and deans to seamlessly collaborate on any item within Course Builder.

For the lesson plan editor, we wanted to allow curriculum designers to feel enabled to create rich classroom activities from a collection of active learning elements that they could assemble in any number of flexible ways.

I began by creating a taxonomy for creating lesson plans:

I designed a number of different ways that these building blocks could be assembled into a functional lesson plan. After testing using low fidelity paper prototypes, the method that resonated the most with faculty was a solution which leaned heavily on a drag and drop interface. 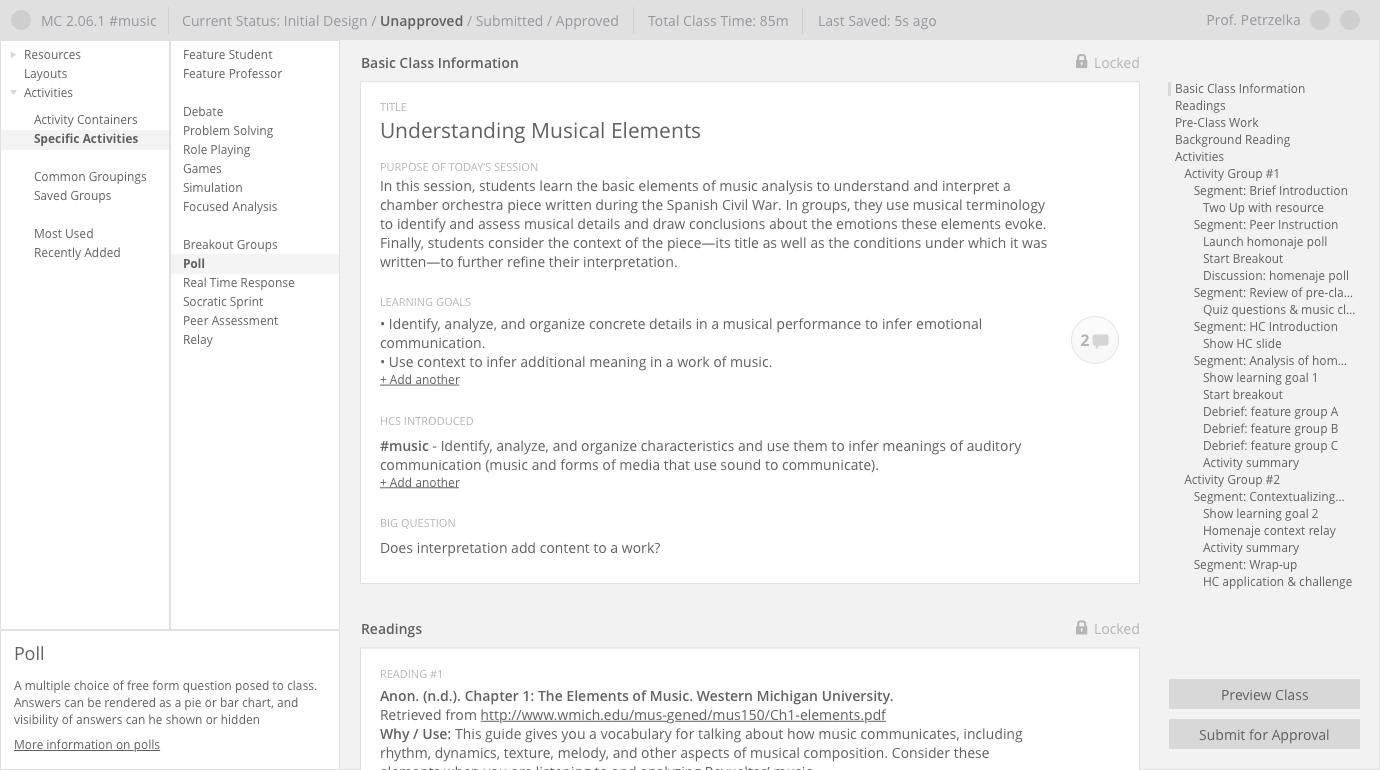 Course designers could select from a “drawer” of steps and elements to quickly assemble a series of activities for any given class session.

An early exploration looking into how resources or activities could be dragged into a lesson plan. 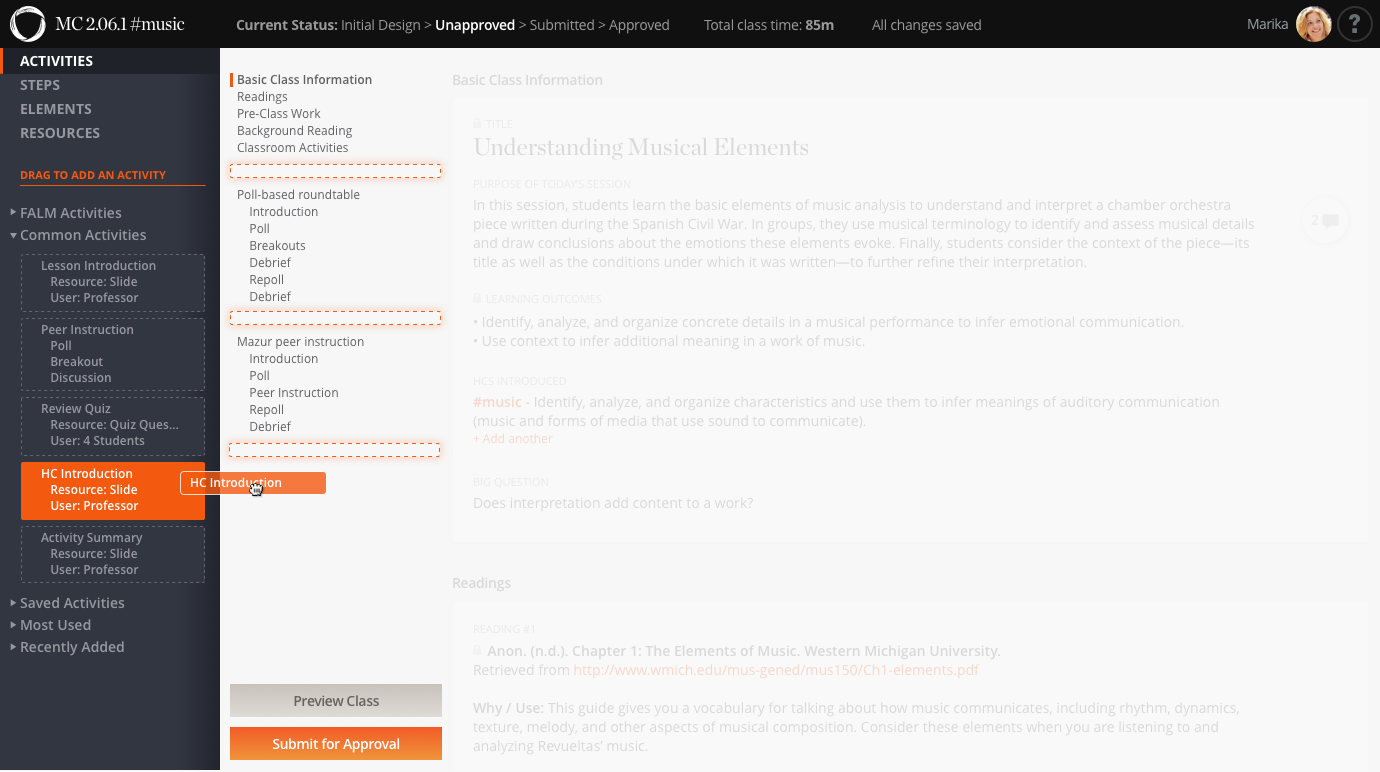 Lessons Learned and Moving into Production

Working closely with a Senior Software Engineer, the first version of the lesson plan editing interface was developed and released to an excited Minerva staff.

But while the team was happy that we had solved for the limitations of Google Docs, it became clear that the drag and drop interface was creating more problems than it was solving.

The drag targets were small and the typical lesson plan grew very tall, leading to a situation in which items were being dragged to targets that were well off-screen. This made assembling classes overly laborious when they reached even moderate levels of complexity.

It also quickly became apparent that there were certain activities that were used across a wide number of classes, but the tool required curriculum designers to assemble these manually for every separate class. 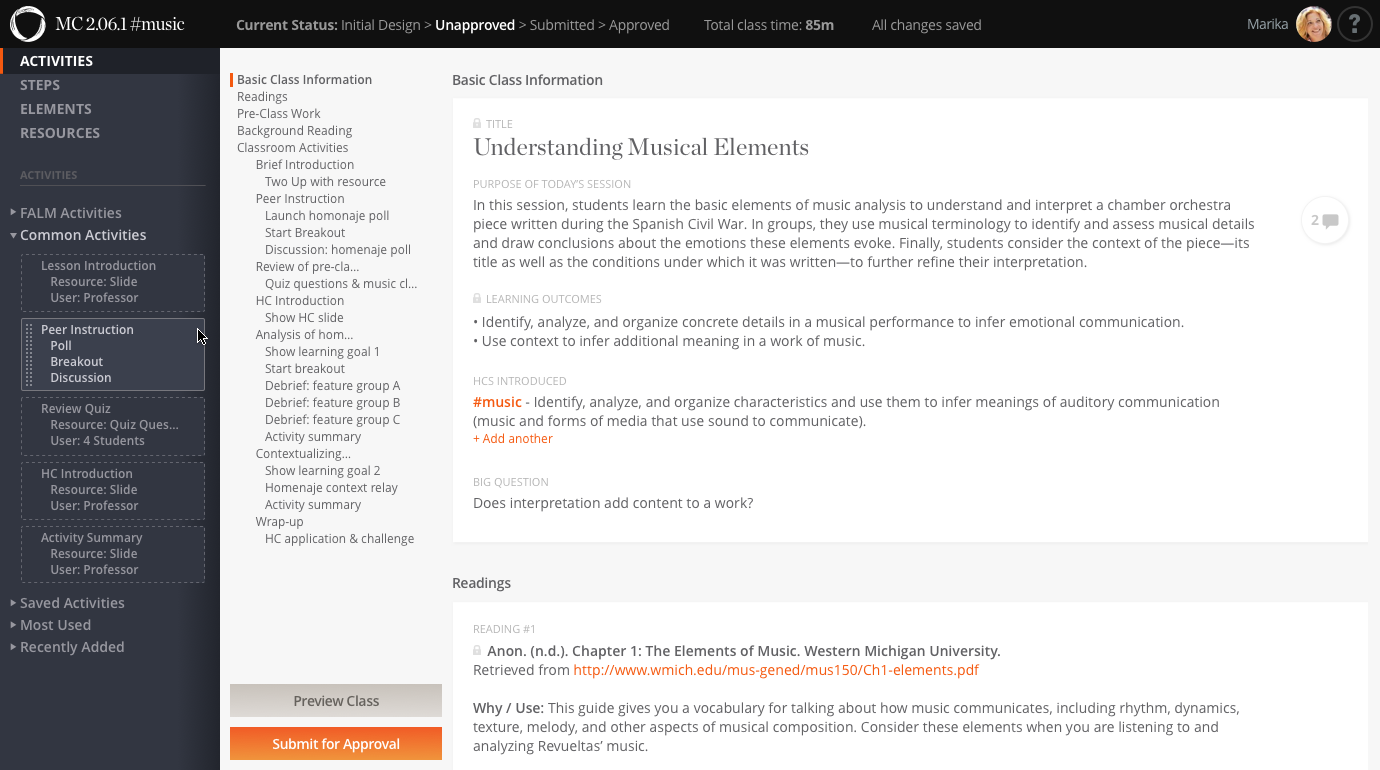 The first version of the Lesson Plan Editor tool streamlined the creation process, but introduced drop target complications and required too many clicks.

While minor changes were being made to the syllabus portion after launch, it became clear that larger enhancements were needed to for the lesson plan editor. I did ethnographic user research and scheduled a series of usability sessions with deans and course developers to dig into the issue more.

I quickly realized that the lesson plan editor needed a moderate-to-large redesign to be as effective as possible. Heading back to the drawing board with the known issues well defined, I began exploring alternate solutions.

Completely removing the concept of drag and drop, I moved towards a solution that used simple buttons for assembling steps and elements into activities. I also gave these a clear color guide so they could be more easily differentiated.

Color and spacing were used to clearly deliniate the differences between activities, steps and elements, and large buttons allowed the addition of all three. 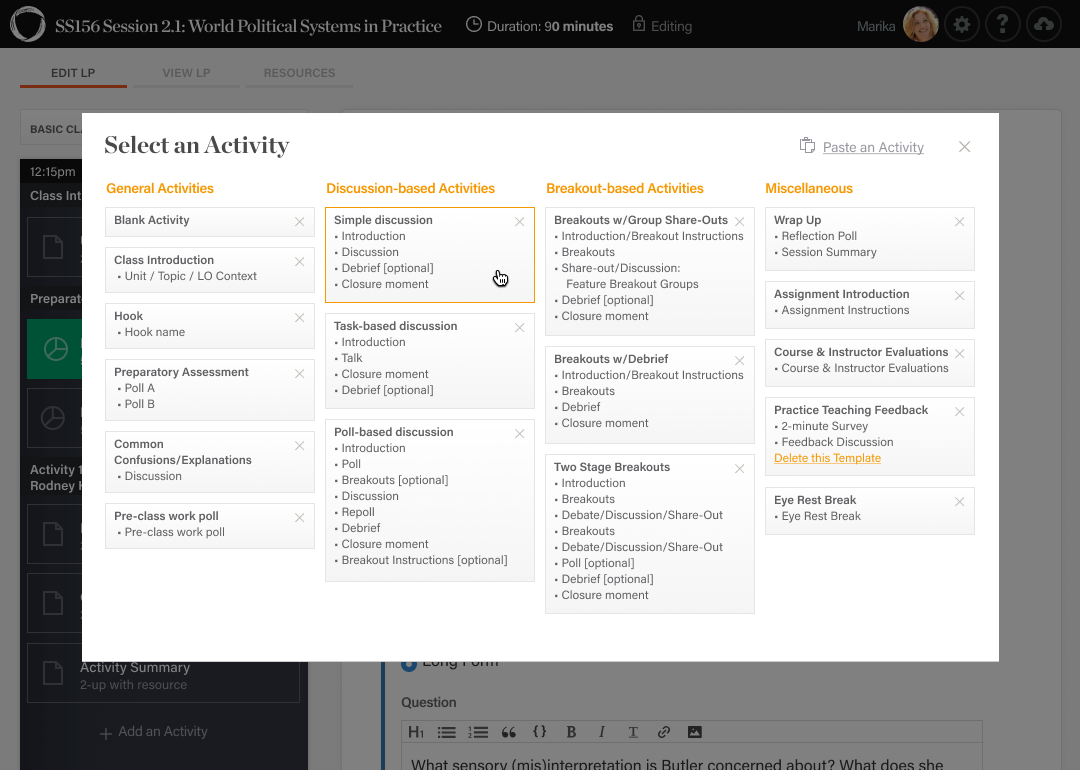 Rather than starting from scratch every time, course designers could begin with often-used templates and tweak as the lesson plan demanded, saving countless hours of time.

And finally, in order to close the gap between the editing tool and the final timeline that it generates, I introduced the actual classroom timeline into the editing interface itself, allowing changes to the lesson plan to be immedely reflected in the tool that would be used to direct the class session. 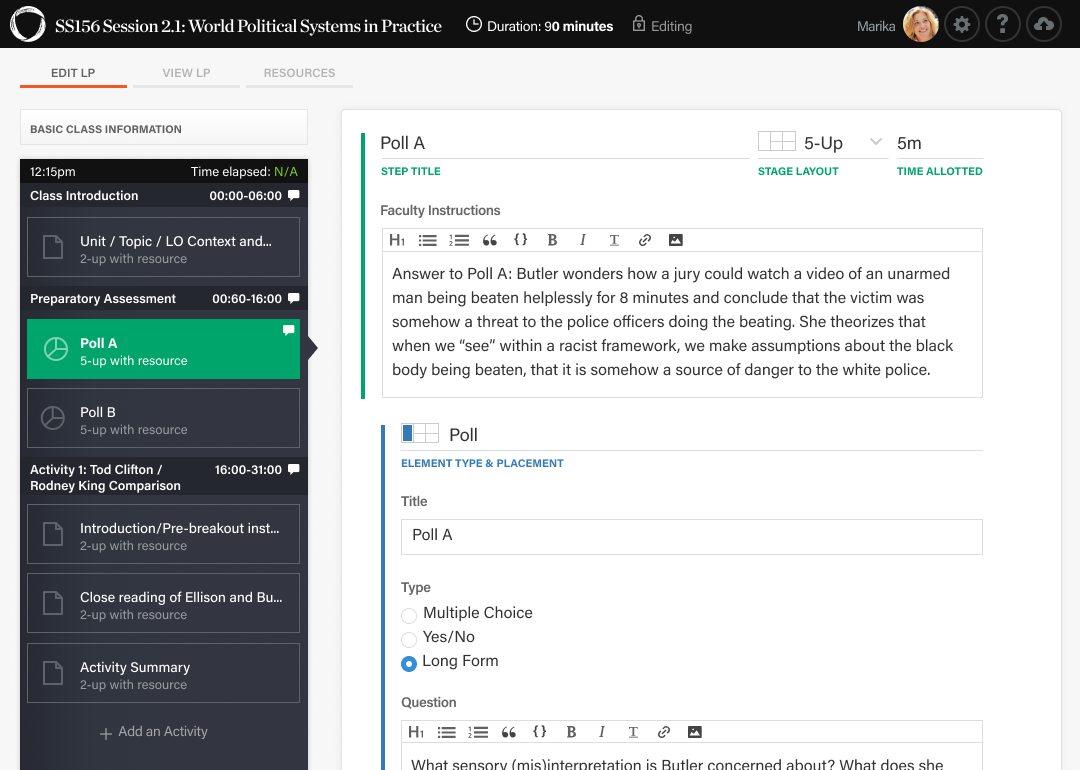 The most recent version of Lesson Plan Editor, showing the lesson plan creating the same interactive timeline which will be seen by the instructor within the classroom.

The final version of these tools launched to much rejoicing from the deans, course designers, and faculty that spend most of their working hours inside the product.

Lesson plan creation accelerated, with 300% more plans created the following year compared with the year prior. The commenting tools and UI affordances also encouraged far more collaboration in the creation process, with multiple reviewers easily able to add feedback that could quickly be acted upon.

I also learned to not rely on a sunk-cost fallacy. If a feature isn’t working effectively, don’t be scared to roll up your sleeves and start over.